My OTHER Blog is HERE and has all my craft related posts.

My "speshal" dare this week 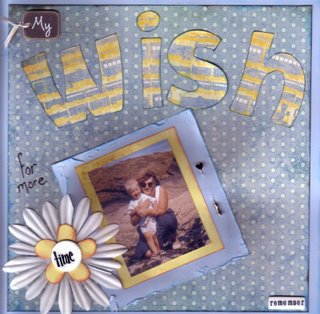 A bowl of spagetti

Thats what my head feels like this evening LOL....
Went to a FAB conference today and (those of you who know me well, will be suprised to hear) I DIDN'T get lost!! Which was just as well as it was quiet tight getting there in time. The conference was on ADHD and really was very informative with some brilliant speakers. Fortunately the organisers are sending us all the notes on the presentations, which will read much better than my notes!
My poor dad was taken off to hospital yesterday ( he didn't have much notice) as his knee is infected and he still has MRSA. I was worried as he was Nil by mouth and i thought that it meant they were going to remove his knee. He had the other removed just after Christmas when it wouldn't heal after his amputation. BUT ..good news they x-rayed and are happy and sent him home today. He is over the moon, so am i :)
Really want to do some scrapping tonight but i think i will watch the last HOUSE and then pop off to bed.
Posted by Sue Jones at 7:49 PM No comments:

This time of the year is mad!! Sorting out activities during the school hols for the children. They have Kidz klub and Mencap as well as a few playschemes ( mostly so they don't get too bored and i don't go too mad!!) Unfortunately i also try to do all their hospital/medical appointments during the hols so lots of things clash.
Dex said the hospital phoned about my gall stone op , and i have to go in soon...i don't have time! AND can't afford to be out of action for two weeks.
Went to ther Wyverstone crop on Sat ( fab as usual :)) Only managed 1 and 1/2 LO's , mostly because i talk too much!! It was lovely to see everyone, they are all very talented and i love looking at everyone's work.
I did the class kit (below). Lorraine has this kit one the scrapagogo site.
I have started to do the "speshal" Dare this week..Its lovely to see all of them on their very own site now.
Meg is going to spend a day at her new high school on Wednesday next week. My children are growing up too quick! 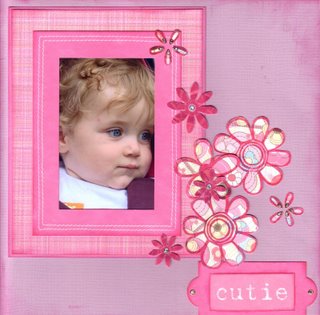 This week is going too fast

I can't keep up ! Why do school try to do so much in the last few weeks of term? I am trying to keep up with four different school activities as well as preparing for Playscheme and my own "stuff"
I can understand why teachers look forward to the summer hols so much. I nearly fell asleep in sience to day!!! Had to get up and walk about while the teacher was explaining an experiment.
Awful day on Saturday :( Meg was invited to a party the other side of Ipswich, so Derek took her and a friend. He had only been gone for half an hour when he rang to say that the breaks ( on MY car) had failed and he had managed to pull over. Could I phone my insurance company for someone to come out? I was put on hold for 90mins!!!
I would just like to thank my friend Anso who was online with me though out this and helped to keep me sane (ish). Eventually I put the phone down though tears and phoned another number. It got sorted out but Derek had to wait for over three hours. A police woman picked up Megan ( who needed to eat ) and her friend and took them to the party. Got my car back from the garage yesterday ( £73 :()
I have since written a letter of complaint to my insurance company and a letter of thanks to Suffolk police force.
Sunday was better even though we went out LOL.
I now have three dares to catch up on and my Looovely scrapagogo kit to do ....Ohh and the five Christmas cards for playscheme to sort out before Friday so we can order supplies. Also been asked to help with thr headmasters leaving presant.
Just got back from Megans school's musical evening ( at the local church). So not getting much done tonight.
Here are my speed scrap Lo's.Done last week: 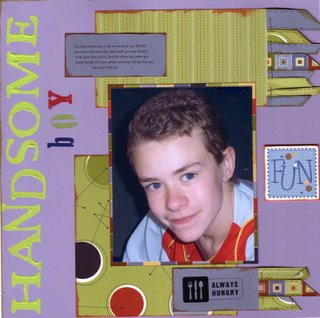 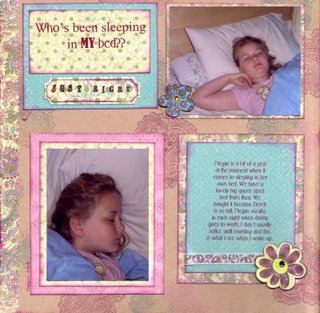 Thank goodness!! LOL Went to the opening of the Scrapagogo shop last night, didn't belive Lorraine when she said it really is only about 10-15 mins from Eye. It took me 45 mins AND i got lost twice, asked directions twice! If it is at all possible for me to get lost or take the longest route..i will! Took 15 mins to get home, So, sorry for not having more faith Lorraine :) All the signposts had directions to Eye on them , was dead easy!
Anyway, the shop was FAB!! If you get the chance to pop along DO. I am not good with the linky things but over to the right is a link to the scrapagogo site where you can book a workshop. The stash is Looooooooooooooovely and i managed to spend more than i intended ( as usual ;)). Also picked up next months DT kit and can't wait to play.
Still haven't done ANY scrapping this week :( except making a couple of Birthday cards and i also made two more beaded bracelets.
Went to the local playscheme meeting on Weds night ( i have been on the committe(sp?) for YEARS!) and help with the crafts. The theme this year is CHRISTMAS!! ( I B****y hate Christmas!) I am making a different type of christmas card each day..ohh joy LOL. Poor kids will think Christmas has come early and the parents are not going to be impressed. It was NOT my idea but we are trying to get a bit more publicity so that hopefully "New" mums will take over and we can finally retire..fingers crossed.
Have a good day :)
Posted by Sue Jones at 6:42 AM 1 comment:

First time in AGES that i didn't scrap over the weekend. I did paint all my rusty gargen furniture ( took ages!!) and it now looks so much better.
Tidied a bit more of the garden , really need a skip!
Off to work in a min :) Still really enjoying it and it looks like i might be able to go on a couple of courses before the end of term as well as the ADHD one.
Looovley sunshine this morning, i think we are due to get a thunder storm later though.
If anyone is reading this ..HAVE A GREAT DAY!
Posted by Sue Jones at 7:30 AM No comments:

Feels like it has been a loong week. At least we have lovely sunshine now :)
Have i got any exciting news from last week? No nothing wonderful happened LOL. I am allowed to take a day off at the end of the month to go to an ADHD conference in Ipswich ( the school have no funds to pay for me to go, i have to do that myself). At least i won't get docked a days wages :)
Stayed up late last night to get the scraplift challenge done. Used my Boho Chic papers , i LOVE them :).
Need to catch up with the DARES, got two to do and a couple of ACT's for the monthly swop.
We are having double glazing installed soon and i need to provide access to the actual windows!! I have to move my scrapping table ( if i can find it under all the stash and mess!
Thought i would have another go at bracelet making. I have onlt made one so far but do have enough beads etc for at least two more. I made this one ages ago. 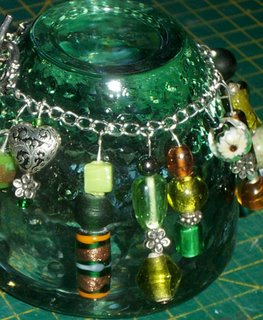 But nice ideas don't work with THIS family!! We (stupidly) thought it might be nice to go to the seaside for tea. Just fish and chips at the seaside..not too difficult , you would think! HA! Nooooooooooo First we leave about 5pm, you have to remember here that Meg is diabetic, anyway it is 6pm when we get to Alburgh. There are two chip shops, but , both have an enormouse queue. We park up and walk along the beach ( this is where the OCD, and autism kick in LOL) Both Dan and Nats asked about a hundred times if we were going to miss Casualty..each time i said yes :)..sigh. Nats is also breathing obsenities(sp??) in my ear , she can't cope with change and tells me its because she can't cope with crowds ..there are no crowds! Anyway joy of joys , we reach the long queue and i realise i left my purse in the car !! Well Nats calls me a stupid bloody woman at the top of her voice, once again everyone is cross with me :P
We get to the car somehow ( kids are all squabling loudly all the way)
Meg will need to eat soon.
We drive to Ipswich ( 25 miles away) to KFC loooooooovely :( Meg was fine BTW blood sugars ok when we got there . Not sure about mine and Dex though LOL
This morning Dex has taken Dan on a bike ride and i am off to the garden center with Nats and Meg ( notice i get the easy ones LOL!!) It really is the only way to go out ..seperate ..Nats and Meg couldn't cope with a bike ride..anyone reading this keep your fingers crossed!!!!
Posted by Sue Jones at 10:33 AM 3 comments:

Meg found a box full of tattoos under the sofa and went a bit mad..to say the least! 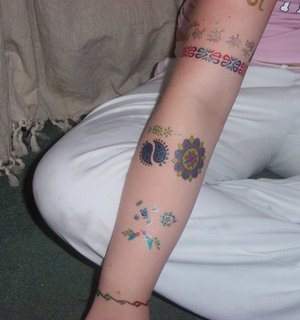 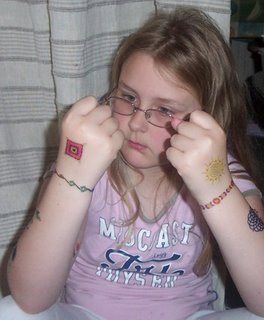 A little experiment for Anna 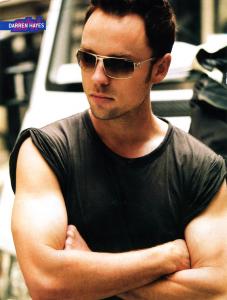 I have even put the heating on as i am soo cold! The children are confined to the the house AGAIN and are driving me bannanas, I have no idea how Dex manages to sleep through their fighting and screaming. They have played games and watched TV but theres only so much they can do.I have just printed out some colouring pages for them. I said there was a prize for the quietest one LOL.
We have a nest in our back garden in the hedge, unfortunately a cat pulled it down and one of the four babies was killed. Dex rescued the nest and we managed to get it back. I must admit that i didn't think the parents would come back as the nest had been touched and moved but, they have :) There are only two babies left now but Dex says they are quiet healthy looking and should be able to fly soon awww.
Anyway i think you can just see a few feathers if youy look real close..willtry to get a better photo when( and IF ) it stops raining! 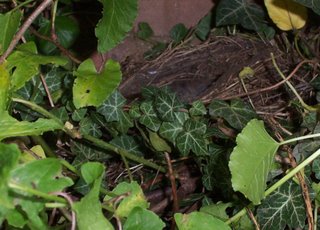 Sue Jones
living in the country , working in a school for over 30 years but looking forward to retirement, mum to three adult children with additional needs- always busy

is HERE where you will find all my card making/scrapbook creations there.